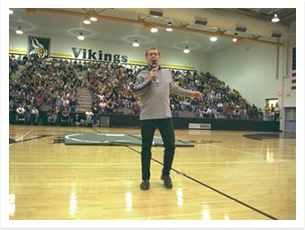 So many times the reach of the church is unfortunately contained within the walls of the church building. Al was one of the first and only Christian artists to successfully minister in public schools.  In 1997, Al began touring public schools.  Al was able to encourage kids who already had a relationship with Christ as well as open the doors to those who were lost. Although he would make his faith known, state and federal law prevent proselytizing during school hours. Al created a program to encourage good character and morals – something even non-Christians all want instilled in their children- called “Who Are You in the Dark?” Combining an encouraging message with music, Al gained the attention and respect of the students.

A great assembly during school was a huge part of the master plan, which was that Al would do a Christian concert that evening that all the students were invited to attend.  Most of the time, these evening concerts were attended by not only the students but other friends and youth groups in the area, often exceeding 3,000 a night.  In many cases, this was the first time these students had experienced God’s teaching and love. Al had booklets on a myriad of topics- from abstinence to peer pressure to personal loss. All of these were in plentiful supply and free for students to take.  Materials were given to youth pastors and kids were given Bibles as a way to leave an impression after the concert was over.

Half a million booklets were distributed to students throughout this time. In 2004, Al was contacted by a faith-based organization in Washington DC about a partnership and Al then donated his materials the group, who continued to disperse them among a wider audience.

The impact from these assemblies was astounding. School administrators, parents, students, teachers and pastors all responded with praise and accolades. test website speed Al brought in other artists and speakers who shared his heart for these events and they continued to grow. This encouraged Al to creatively delve deeper into ways he could reach other students, outside of the church.

If you are curious about any of the issues discussed here or want to learn more about an important topics to young people, the booklets are available online here.